A Guide to Southampton Cruise Port

A Guide to Southampton Cruise Port 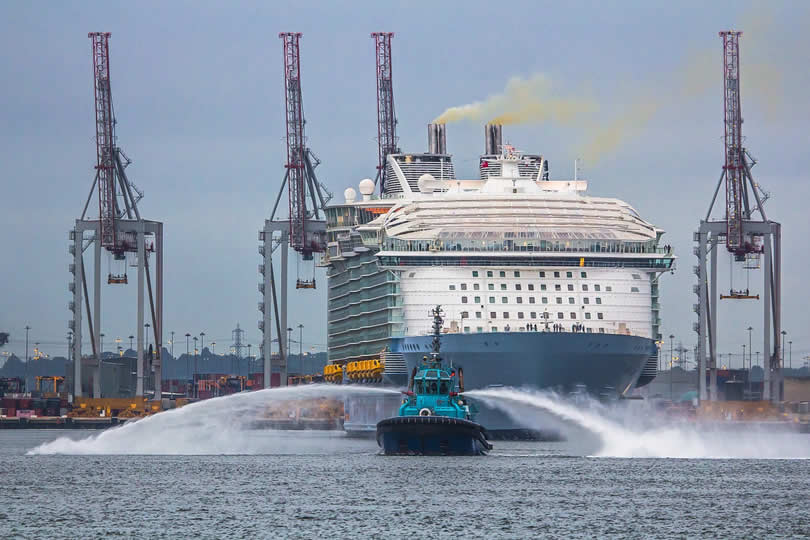 Southampton is located on the south-east coast of England and is one of the largest and busiest ports in the world.

Numerous cruises depart the city every year and just as many ships visit as part of a British Isles cruise itinerary.

Sailing UK waters is hugely popular with cruisers from across the globe and ship choice is just as varied.

The port is synonymous as being the starting point of Titanic’s maiden voyage, she left from Berth 44, Ocean Dock Gate 4 on April 10, 1912.

There are nods to Southampton’s Titanic connection throughout the city, including the Titanic Engineer’s Memorial.

Located just 70-miles outside of London (see best hotels), Southampton has easy public and national transport links and the average rail time between the UK capital and Southampton is approx. 1 hour and 20 minutes on a direct train.

Southampton has seen a huge amount of re-generation in recent years and it has become a popular and vibrant place to visit for people of all ages.

There’s something on offer for everyone to enjoy and how much you immerse yourself into its history and culture is entirely up to you.

Read also: Where should I stay for a cruise from Southampton ?

Southampton has several cruise terminals and they are:

They are all relatively close together and as you enter the city by car, there is ample signage to point you in the right direction.

All five terminals are also easily accessed via public transport links, although, we would recommend using a taxi to get from Southampton Central train station if you have a lot of luggage.

There are always taxi’s outside the main entrance to the station. Cost is around £6 to £7, but may cost more on weekends and bank holidays.

Who Sails from Southampton ?

Other cruise lines that often sail from the city or include stops in itineraries include Regent Seven Seas Cruises, Silversea, Norwegian Cruise Line, Aida, MSC Cruises and Oceania Cruises.

Things to see and do in Southampton

Southampton offers a huge variety of things to see and do and it’s also the gateway to exploring places further afield, such as London and the New Forest.

Of course, how far you can go and what you can do will depend on how long you are in port. If you’re joining or disembarking your ship in Southampton, we would highly recommend that you spend a night or maybe 2 in a hotel and give yourself ample time to explore this wonderful maritime rich city and its surrounding areas.

So, what can you do in Southampton itself? Well, let us mention some places we think should be on your list:

SeaCity Museum
SeaCity Museum tells the story of the people of the city, their fascinating lives and historic connections with Titanic and the sea. They bring maritime history to life through an interactive experience designed for all ages and it’s absolutely worth visiting. You can find out more information on their website.

West Quay Shopping Centre
West Quay is a large shopping complex right in the heart of the city and features hundreds of shops, restaurants and bars. It’s also right next to some of the old remains in the city, including Bargate and the historical old town walls.

Titanic Engineers’ Memorial
Located in East Andrew’s Park, this is a memorial to the engineers who died in the Titanic disaster on 15 April 1912.

Hythe Ferry & Railway
The small town of Hythe is a short ferry ride across the Solent and once you arrive, you can enjoy the journey aboard the Hythe Pier Railway, the longest operating public pier railway in the world. Hythe is your typical British seaside town and it’s definitely worth giving up a few hours of your day to enjoy.

Southampton Common
Just one of the many public green spaces within the city, Southampton Common is a great place to relax and people watch. You could also buy some refreshments from local stores and enjoy a small picnic.

Solent Sky Museum
Solent Sky is a museum dedicated to the history of aviation in Southampton, the Solent area and Hampshire. It’s certainly worth a visit if aviation interests you.

If you have previously visited Southampton and are looking for ideas on other places to explore, then why not consider some of the below options. Of course, how far you can go will depend on how long you are spending in the city.

Isle of Wight
If time allows, you could also visit the Isle of Wight. Red Funnel ferry services operates from Southampton (close to the Ocean and QEII terminals) via the RedJet and the Red Funnel vessels. Both of these services debark and embark in Cowes. The RedJet is the fastest option, with the journey time being approx. 25-minutes and for foot passengers only. The Red Funnel service is approx. 60-minutes and cars can be loaded.

New Forest
New Forest National Park, the New Forest Wildlife Park, Exbury Gardens & Steam Railway and the National Motor Museum can all be found in the New Forest area. We would recommend doing further research on this before departure and making a plan of exactly what you want to see and do during your time in the area.

London
This one is self-explanatory, it’s the UK’s capital city and bursting with things to see, do, eat and experience. Trains from Southampton Central run throughout the day to London Waterloo.

Stonehenge
A prehistoric UNESCO World Heritage Site (added to the list in 1986) known the world over, it is believed to have been constructed between 3000 B.C. and 2000 B.C. You can easily take a 5 hour tour from Southampton to visit Stonehenge, with an additional stop in Salisbury.

Best Time to Visit and Cruise from Southampton

Southampton is far warmer in the summer months and therefore you’ll find more outdoor things to enjoy, including festivals and events. But we think Southampton is a great place to visit at any time of the year because there’s always something to do.

You’ll often find an impressive Christmas market in the heart of the city during the festive season, the Isle of Wight Festival is held every year on its namesake island, the Southampton annual Boat Show is world-renowned and there are dozens of public spaces, restaurants and bars to enjoy

Cruise ships visit and depart the city throughout the year, with the summer being incredibly busy for those escaping on Mediterranean cruises or Norwegian Fjords and Baltic cruises. The cooler autumn and winter months are usually when you’ll see an increase in sailings to places such as the Canary Islands and across to the Caribbean.

Southampton is also the start point for many World Cruises, so it really does live up to its other name of ‘Gateway to the World’.

Southampton is certainly not short on hotel options and some of the closest to the docks are:

There are dozens of other hotels and Bed & breakfast accommodations in the city, but the above are some of the closest. Private rentals can also be found. We suggest making reservations as early as possible – when the port is busy, the hotels can quickly become full weeks in advance.

There are also some hotels outside of the city that offer cruise specific packages, usually with the inclusion of car parking for 2-weeks. These are ideal choices if you plan on driving to the port.

Getting to Southampton Cruise Terminals from London

The journey between Paddington and Southampton is approx. 1 hour and 46 minutes. You can also take the Underground from Heathrow to London Waterloo and board a train there to Southampton.

National Express also runs an express coach service between the two and it can often be considerably cheaper than rail fares. It’s best to do your price and ticket research ahead of time. Coaches depart several times per day from Terminals 2,3,4 and 5.

Journey time varies but is often around the 4 hour-plus mark.

Taxis are also an option, but these will be costly. Private shuttles are another option.

We always recommend spending some time online doing research on your cruise ports ahead of departure, it allows you to then manage your time in ports to your best advantage.

With this in mind, we want to share a few things with you that might make your planning a little easier for your cruise visit to Southampton.

This is worth noting if you plan on visiting the Isle of Wight. Occasionally, they will allow passengers to use the service for free who are planning on boarding the Hythe Ferry.

The city is easily accessible on foot, so once you are in the heart of it, public transport is not an absolute necessity. Some of the best areas of the city are pedestrian zones.

Browse the ‘Offers’ section on the Visit Southampton website for information on money saving deals within the city. These often include student discount information, 2-4-1 drinks offers, food offers and more.

Related to Port of Southampton in England