The Trieste cruise passenger terminal, Molo Bersaglieri, is mainly used by Costa Cruises as a embarkation or disembarkation port. Cruise ships dock at the Stazione Marittima (Port Station), not far from the Piazza Unita d’Italia. Popular ports of call on voyages from Trieste are Venice and the walled city of Dubrovnik in Croatia.

Trieste Centrale train station is situated 10 minutes from the cruise pier, north of the city centre at Piazza della Liberta with connections to Venice, Rome, Florence, Verona and Milan. The bus station is located right next to the railway station.

From Friuli Venezia Giulia Airport, 35km from the city, you can get the APT bus nr 51 to Trieste railway station, or take a taxi to the city center. Hotels can be found nearby the port, close to Corso Cavour at the start of Trieste’s harbour-side promenade, in the city centre and close to the airport. Some accommodations overlook the bay or are set right at the seafront offering direct access to the beach.

Properties in Trieste Italy near Port

Great value accommodation set in the centre of town near the train station. 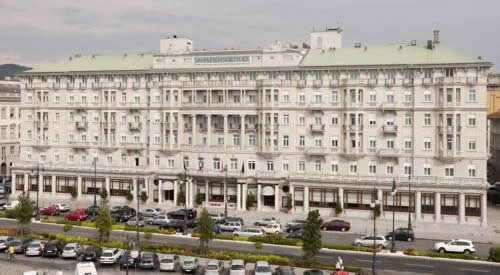