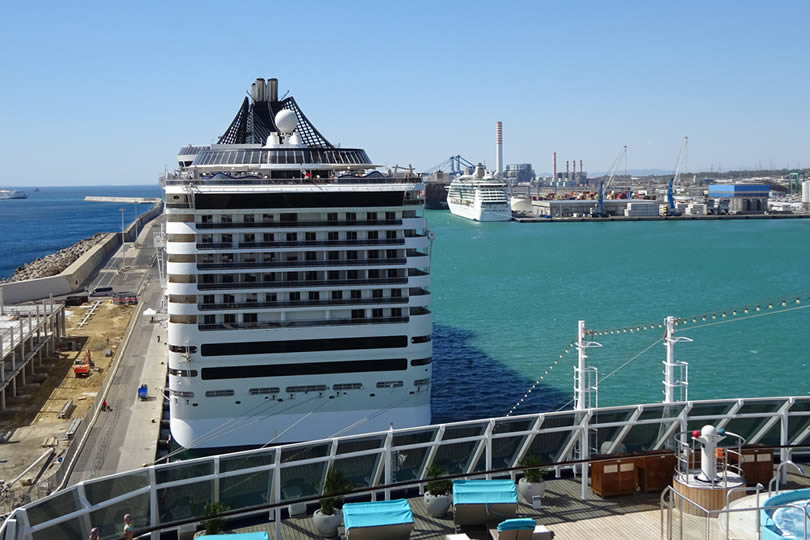 Civitavecchia in Italy is one of the busiest cruise ports in the Mediterranean.

It is the gateway to Rome, sitting approximately 80km away to the northwest of the eternal city.

For first-time visitors, Rome is often the tour of choice, but in this guide, we’re going to look at what there is to see and do both in the port area and in Rome, respectively.

There are several berths available for cruise ships and the town is within walking distance, however, it’s quite a substantial walk, so shuttle buses are often running back and forth between each terminal and the port gates throughout the day.

There’s no main terminal building, as such, but as Civitavecchia is a popular transit and embarkation port, you will find marquee style tents for housing luggage and some seating areas.

Read also: Best Hotels in Civitavecchia and near FCO Airport

The port of Rome in Civitavecchia has several cruise terminals and they are:

Who Sails from Civitavecchia ?

Other cruise lines that often sail from the city or include stops in itineraries include Regent Seven Seas Cruises, Crystal Cruises, Sea Dream, Star Clippers and Oceania Cruises.

Things to see and do in Civitavecchia

Forte Michelangelo – This is actually part of the port area and you’ll likely be dropped off right outside it by the shuttle bus. It was built in 1537 to protect the port area. It’s surrounded by a man-made stream-type body of water that lights up at night and looks stunning.

Civitavecchia National Archaeological Museum – The museum sits on three levels and the building itself dates back to 1700 Pope Clement XIII. Records on show are from the dawns of civilization, during the Ancient times, right through until the Middle Ages.

Taurine Baths – located roughly 5km from Civitavecchia, the Taurine Baths, also known as the Baths of Trajan, are well-worth visiting. You must also visit the nearby Ficoncella Thermal Baths.

Things to see and do in Rome

Colosseum – Also known as the Flavian Amphitheatre, this is one of the most-recognised ancient sites in all of Rome. Construction began in AD 72 and was completed in AD 80. At the time, it was the largest amphitheatre ever built, being able to hold up to 80,000 spectators.

St Peter’s Basilica – The world’s largest Basilica of Christianity and another of Italy’s world-famous landmarks, located inside the Vatican City. St. Peter’s is the most renowned work of Renaissance architecture and the largest church in the world.

Pantheon – A former Roman temple and now a church, the Pantheon was rebuilt by emperor Hadrian in roughly 126 AD.

Trevi Fountain – The Trevi fountain stands at 26.3 metres tall and 49.15 wide and it was designed by Italian architect Nicola Salvi. It’s one of Rome’s most-visited sites and legend has it that if you throw a coin from your right hand over your left shoulder into the fountain, you will one day return to the eternal city.

Roman Forum – Also known by its Latin name ‘Forum Romanum’, it is surrounded by the ruins of several hugely important government buildings from ancient times.

Vatican Museums – Public art and sculpture museums within the Vatican City and displaying works from the Catholic Church. The art museum is home to some of the most important Renaissance masterpieces in the world.

Sistine Chapel – The official residence of the Pope, originally known as the Cappella Magna. Located within the Vatican City.

Piazza Navona – Built on the site of the Stadium of Domitial and built in the 1st century AD. This is a public space within Rome.

Spanish Steps – Located between Piazza di Spagna and Piazza Trinità dei Monti, the steps are dominated by the Trinità dei Monti church, which sits at the top of the stairs. There are 135 steps in total.

Saint Peter’s Square – This is the plaza area which is located in front of St Peter’s Basilica. At the very centre of the square sits an Egyptian obelisk which was placed in 1586.

Best Time to Visit and Cruise from Civitavecchia (Rome)

Spring and summer months are the most popular times for in-transit ships and embarking passengers, but these are also the busiest times to visit the city of Rome.

Some cruise lines do operate sailings in the Mediterranean, in the autumn and late winter months and although air temperatures are much cooler, most sites are far less crowded.

See more: What’s the Weather in Rome and Civitavecchia (by month)

If you are joining your ship in Civitavecchia Italy, then we suggest you stay near the port or spend a night or 2 in Rome, instead of spending that time in the port area, simply because there is so much more that you can see and do.

Rome is bursting with a variety of hotels to suit and budget and these are a few of the ones we would suggest. Remember, Rome is a large place, so although these hotels are all located within the city limits, they may not necessarily be within walking distance of the monuments that you would like to see – it always pays to do some research ahead of time on what will work best for you, overall.

When staying near the cruise port, some of the best hotels in Civitavecchia are ;

Some of the popular hotels (accommodation) in Rome include ;

How to get to Rome from Civitavecchia ?

The quickest and easiest way to travel between Rome and Civitavecchia is by booking a car with a driver who is authorized to pick you up at the port. A private transfer is also the most comfortable option. Travel times by car depend on traffic, although you can expect an hour and 20 minutes travel time to the center of Rome.

Another way of getting to and from Rome is to use an authorized taxi or limo service that depart from the port’s mobility service center at Largo della Pace.

From Largo della Pace, which is the entrance of the Port of Civitavecchia you can travel to various points in and around Rome.

From Civitavecchia station, Express trains connect the port with the center of Rome in about 40 minutes, a service that launched in April 2020. Every morning, trains depart from the port with stops at Roma San Pietro Station (15 minutes from the Vatican) and Roma Ostiense Station.

In the afternoon, trains make the journey back to the port. Guaranteed seating is offered on all trains and you avoid the hassle of trying to find parking. In addition to express trains, there are slower and cheaper commuter trains between Termini and Civitavecchia stations.

These trains run more frequently and will stop at San Pietro Station (40 min), Trastevere Station (50 min), Ostiense Station (55 min) and finally Termini Station (70 min), which is the terminus station. Termini is served by Metro lines A and B, which links you to many of Rome’s iconic places. Ostiense Station is close to Circus Maximus and the Colosseum.

There are also direct buses to Rome from Largo della Pace operated by SIT Shuttle Bus with stops at San Pietro and Termini Station.

Once in Rome, Metro lines A and B are perfect for getting around the city. Bust 64 and Tram 8 are also convenient options for getting to Rome’s main attractions, including the Pantheon, Piazza Navona, Campo de Fiori and Piazza Venezia.

In addition to public transit, you can travel by taxi between stations and your hotel if you are staying overnight in Rome. Taxis are a great way to get around, especially if you are traveling with a lot of luggage.

Getting to Civitavecchia from Fiumicino Airport (Leonardo da Vinci International)

Rome’s Fiumicino airport (Leonardo da Vinci) has its own train station, making things a little easier when making your journey to the port. Board a train at the airport for the city of Rome, alighting at Trastevere Station, and simply board a train that is heading for Civitavecchia.

This journey takes approx. 1 hour and 45 minutes, but it can hit the 2-hour mark.

Private transfers are also an option, but they will be more expensive.

Getting to Civitavecchia from Rome Ciampino Airport

Rome Ciampino airport is connected with the Ciampino station by shuttle bus ATRAL, also making it easy to get to your ultimate destination. Board the ATRAL that connects the airport to the station.

As above, private transfers are also an option, but they will be more expensive.

Organised excursions for those calling into Civitavecchia for one day and hoping to go to Rome will be plenty. You can easily book this privately or your cruise line will have several options available for you as well to pick.

Of course, given the duration of these days (often 10 hours or more) and the distance to and from the city, the safest option to avoid missing your ship is to book with your cruise line. However, if you do wish to explore Rome on your own, you can take a train from Civitavecchia train station.

We would recommend the InterCity service as it is slightly faster, but there are other options available that are cheaper.

If you do decide to go under your own steam, we highly recommend that you spend some time before your cruise planning out your day. Some monuments are easily within walking distance of each other, where-as others may require a short cab ride or public bus journey in order to reach.

Having a schedule set out in advance will allow you to make the very best of your time in Rome, and maybe even allow you some souvenir shopping before returning to the port and your awaiting ship.

Related to Port of Civitavecchia in Italy