Hotels in Barcelona with shuttle to Cruise Port?

Cruise ships dock at the waterfront in Port Vell, at the southern end of Las Ramblas in the centre of Barcelona. The majority of cruise passengers choose to stay in the central areas.

Nearest hotel is the Eurostars Gran Marina. If you’re departing from the North, South, or East terminal at the World Trade Centre (WTC) you can easily walk from this hotel to your ship (no shuttle needed). However, most larger ships depart from the Quai Adossat at terminal A, B, C or D which is over a mile from the Eurostars Gran Marina hotel. Then it’s better to take an inexpensive taxi to your designated cruise terminal.

Several hotels are located really close to Barcelona cruise port but still are too far to walk, esp. with your luggage. Taxis in Barcelona are relatively cheap so it’s very easy to transfer from your pre-cruise hotel to your cruise terminal. Just ask your hotel concierge or front desk to arrange a taxi for you.

Taxi’s are plentiful and not very expensive so it’s very easy to get to your cruise terminal. The hotel porter can flagged down a taxi for you or the hotel concierge or front desk will call one for you. All very easy. Price will be around 15 Euro, depending on traffic. Barcelona hotels can always organize a transfer to the cruise port for you at an additional cost.

You can also arrange a private transfer yourself, which will be very convenient but more expensive than catching a taxi.

Our advice is not to base your hotel choice on shuttles.

Fabulous 5 star property. One of the nearest hotels from the cruise port of Barcelona in Spain. Top location !

Situated on Avenida Diagonal, next to Diagonal Mar Shopping Centre. 10 minutes walk from the beach. 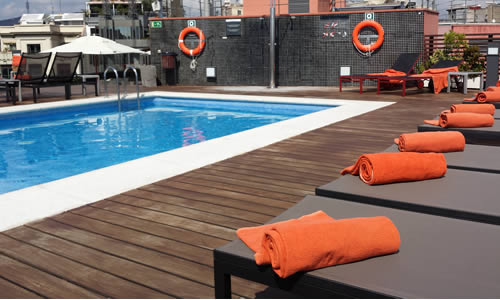