A Guide to Amsterdam Cruise Port

A Guide to Amsterdam Cruise Port 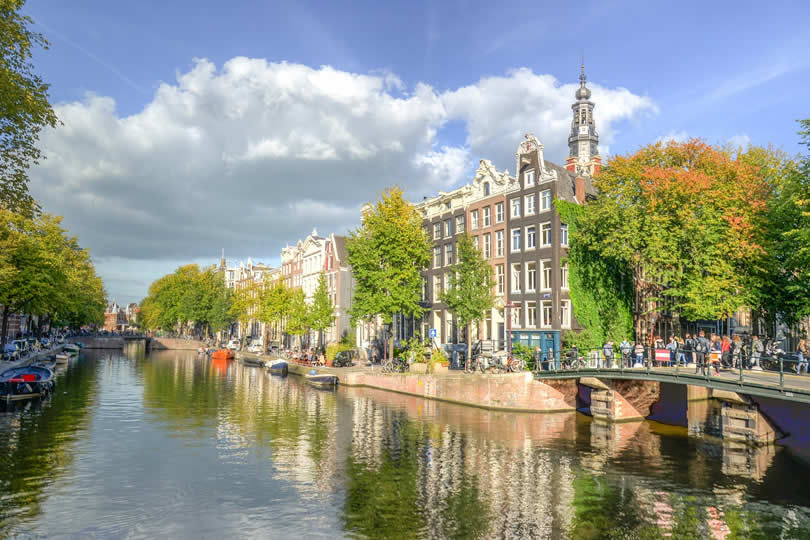 Amsterdam is one of the most popular cities in Europe for cruise ship passengers, with over 170 ships visiting each year, and it has a never-ending option of things to see and do.

It really is a place that needs more than just a day visit, but if that’s all you have, hopefully our guide will help you decide where to go and what to do during your time here.

The Netherlands’ capital city, Amsterdam is known throughout the world for its canal system, narrow houses, incredible heritage, thousands of bicycles and, of course, its impressive museum district.

It’s a place for all ages to enjoy and proudly one of the safest countries in the world.

The passenger terminal is located next to the Mövenpick hotel, which makes this the closest hotel to the port.

Some ships will also dock in the town of Ijmuiden which is outside of the city. The journey from here to Amsterdam central is around 40 minutes, depending on traffic.

Who Sails from Amsterdam ?

Amsterdam is a home port to numerous cruise ships from lines including Holland America Line, AIDA, Costa Cruises, Celebrity Cruises, Norwegian Cruise Line and many others.

Other cruise lines that often sail from the city or include stops in itineraries include Seabourn, Viking Ocean, Oceania Cruises and Cruise & Maritime Voyages.

Getting to Central Amsterdam from Schiphol Airport

The easiest and quickest way to get from Amsterdam Schiphol Airport to Amsterdam central station and city centre is by using the NS train service. The main station is located directly beneath the terminal building and the high-speed train will see you arrive in the city within just 17-minutes.

Prices vary depending on the type of ticket you want, but we would recommend something that includes things such as the tram network if you plan on exploring throughout the city. The Netherland’s has a very good public transport system and the NS service runs throughout the country and further.

When heading to your hotel after arriving at the central railway station you can do this either by foot when having a hotel near the station. Tram, bus, Uber or taxi can be used when your hotel is located a bit further and especially if you’re carrying lots of luggage.

You can also find taxis waiting for you just outside of the airport’s arrivals hall which charge you a flat fee of 39 euro to get to the city centre.

Another option is the Amsterdam Airport Express, or Bus 397. This bus departs several times an hour between the hours of 5 a.m. and 12:30 a.m. from outside the main airport hall. Travel time is approx. 30 minutes and does not go to Amsterdam Central Train station but stops near Olympic Stadium, Museumplein, and Leidseplein.

There is also an easy and comfortable airport shuttle service to and from the Schiphol Airport and your hotel. Service is run by Connexxion. However one of the most convenient and most relaxing options after your flight is a private shuttle transfer.

Your have a few options to reach the cruise terminal from the station area. You can walk to the cruise pier which takes about 15 minutes or if you have mobility issues or when carrying a lot of luggage you can take a taxi. Expect to pay around €10. You can also use Uber.

Tram 26 will takes you also from the central station to the cruise terminal. It’s just 1 stop (stop is called ‘Muziekgebouw Bimhuis’) and stops across the road from the port terminal. Price will be around 3 Euro for a one way trip.

Things to see and do in Amsterdam

The list of things to see and do in Amsterdam is quite literally endless. You could visit every day for one year and still not experience everything this bustling and incredibly vibrant city has on offer.

To help you with your destination planning, these are just some of the recommended options:

Anne Frank House
Located on Prinsengracht, Anna Frank House is the place where Jewish wartime diarist Anne Frank and her family spent their years before being taken to Auschwitz Concentration Camp in Poland. This is one of the most popular places for tourists to visit and it’s a very moving experience. Queues in the summer months can extend around the block, so always try and pre-book online before you travel.

Rijksmuseum
One of Holland’s most prestigious and well-known museums, located in the Museum Square of the city. The Rijksmuseum is a Dutch national museum dedicated to Dutch history and art.

Van Gogh Museum
Dedicated to works of the man himself and also found at Museum Square. The Van Gogh Museum houses the world’s largest collections of work by Van Gogh.

Dam Square
Basically, the town square. This is an area where events regularly take place and it’s also an intersection that can take you down numerous other lanes and streets to seek out hidden gems.

Bloemenmarkt
Amsterdam’s unique floating flower market which was founded in 1862. If you want tulip bulbs, this is the place to come. You’ll find it between Muntplein and Koningsplein on the Single River.

The Oude Church
This is Amsterdam’s oldest building, founded circa 1213 and consecrated in 1306 by the Bishop Utrecht. It became a Calvinist church in 1578 and remains so today.

Amsterdam Cheese Museum
This is a small museum/shop which houses a small area dedicated to the history of cheesemaking.

Hash, Marihuana and Hemp Museum
Located in De Wallen and open to the public since 1985, this museum offers visitors a glimpse into the historical and modern use of cannabis for medicinal, spiritual and cultural purposes. It’s small but very well presented.

Nieuwmarkt
Part of Amsterdam’s China Town and bursting with bars, restaurants and cafes. It’s a nice place to relax between exploring.

De Pijp
One of Amsterdam’s most popular areas and home to the Albert Cuyp Market, the busiest in the city. The Heineken Experience and former town hall of Nieuwer-Amstel are also nearby.

Rembrandt House Museum
This historic house is where painter Rembrandt lived and worked between 1639 and 1656. Many of his paintings and etchings can be found here.

The Amsterdam Dungeon
History through an interactive adventure with live actors, shows and more. Be prepared to be scared! See tickets.

Joods Historisch Museum
This museum is part of the Jewish Quarter and is dedicated to Jewish history, religion and culture. The only one of its kind in The Netherland’s.

House of Bols Cocktail and Genever Experience
Taste, smell, discover and learn how to craft the perfect cocktail. This is an interactive experience that ends with a cocktail of your choice.

If you’ve visited Amsterdam before and would like to go somewhere different, then we would recommend the following:

The Hague
A city within a city and the seat of the Dutch parliament, and 16th-century Noordeinde Palace. The Hague is also home to the United Nation’s International Court of Justice, headquartered in the Peace Palace, and the International Criminal Court.

Haarlem
Hop on a train and enjoy a 20-minute journey to another of The Netherland’s beautiful cities, Haarlem. This is the centre of the flower-bulb-growing district and it retains its beautiful medieval charm. Similar to Amsterdam in many ways.

Zaandam
Just a 7-minute train journey from Amsterdam and you’ll come across Zaandam, where you’ll find great shopping, museums, restaurants, bars and so much more.

Volendam
A typical Dutch fishing village and a hive of activity during the summer months. Enjoy people watching as you sample local delicacies, explore the gift shops and generally enjoy the atmosphere of being in this working fishing harbour.

Edam
The birthplace of Edam cheese and another place that’s just a short journey outside of Amsterdam. Edam can easily be visited as part of a day out that also includes Volendam, as they’re just minutes away from each other.

Best Time to Visit and Cruise from Amsterdam

Anytime is the best time to visit Amsterdam, put simply, because there’s always something happening. The summer months allow for use of the city’s public green spaces, live events, pleasant canal walks and so much more.

The winter months bring a chilly aspect to your day, but in the run up to Christmas there’s always markets to enjoy, even the occasional ice rink proudly set up in random streets.

There are hundreds of hotel options in Amsterdam near the cruise port, but we’ve noted some below that are all within a maximum 20-minutes walking distance of the cruise terminal. They’re centrally located, so everything is easily accessible.

If you take the bottom of Damrak as your starting point (opposite Central Station) you’d keep right on Prins Hendrikkade before crossing at Oderbrug, going under the bridge and then turning right onto De Ruijterkade – from here it’s a straight walk and you’ll see your ship.

Taxi’s will also be available from your hotel.

Here are some highly recommended pre or post cruise hotels in Amsterdam;

Amsterdam is a relatively safe place to explore day and night, so those travelling on their own need not worry about exploring the city solo.

The city is always ‘on the go’, you’ll find gift shops sometimes open until the early hours of the morning, the same with clubs, some bars and dozens of fast food outlets – you don’t really need to plan your visit based on a 9-5 timeframe.

If you plan on visiting a lot of attractions and using the public transport system you may benefit from the use of a I Amsterdam City Card. A one-off payment gives you access to discounts or free entry at over 70 of the city’s top attractions, city wide use of the public transport network including trams and buses, and a unique canal cruise, bicycle hire and discounts at selected bars and restaurants.

Numerous cards are available, with the basic being a 24-hour pass for 65 euros. They can be pre-ordered online and picked up at various locations within the city, including directly from the I Amsterdam info point and store on Damrak.

Your time in Amsterdam wouldn’t be well spent without sampling Dutch frites, which is simply fries and sauce. There are vendors throughout the city selling them and they are super tasty!

Some simply come with a sauce of your choice while others can have extras such as pulled pork, slaw or gravy and cheese. You have to give them a try and these are some of the places we would recommend: Moeke’s, Grizzl, Frietboutique, Freddy Fryday and Manneken Pis.

Related to Port of Amsterdam in The Netherlands