10 Unique things to do in Sydney Australia

10 Unique things to do in Sydney Australia 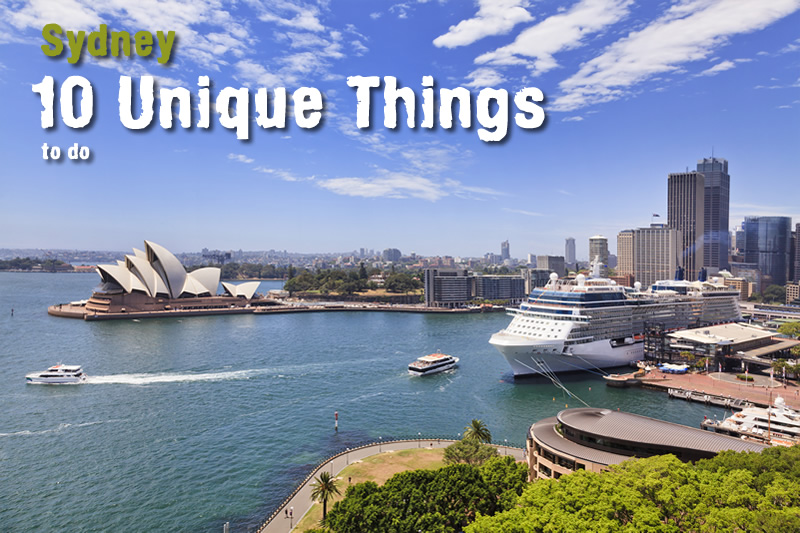 Not for the faint-hearted. If you don’t have the heart or budget for jumping out of a plane, head for iFLY, one of the largest indoor skydiving centers in the world. Within a few minutes of arrival you will be off the ground and flying.

Skydiving isn’t as easy as it looks, but the staff will be at your side as you glide through the 5 meters wide glass chamber. The vertical wind tunnel has four massive turbine fans and generates winds of up to 250km/h.

Some brave staff stay after hours to share spine-chilling stories by candlelight. The Georgian residence overlooks Paramatta and was home to the earliest governors of Sydney.

Your tour will start in the cellar at the bottom of cold stone steps. Strange tales will be told of the house and site’s amazing history and you will learn something about the early days of the convict colony. In scarily small groups you will then depart for your tour.

Believe me, you will be looking over your shoulders. Stand under a tree in the grounds where apparitions, eery mists and screams are often heard and hear about a UFO report from the 1800’s. Don’t go alone.

Another chilling trip into Sydney’s past. The Quarantine Station, or ‘Q’ Station as Sydney residents know it, combines the paranormal with history.

This was Australia’s answer to Ellis Island. You were either let in or sent home. Tour the historical buildings and hear passengers’ stories and then take one of the spookily scary ghost tours. If you are really faint-hearted or have young children with you, then take one of the options designed for kids. They’re still scary enough to give them nightmares.

This can only be done in Sydney. Enough of being scared, then let’s get active!

Sydney Harbour Bridge creates an iconic view of the harbor that is truly unique. A climb experience takes you to the apex of this remarkable feat of engineering. You can only climb three bridges in the world, and this is one of them. (If you’re wondering, the other two are in Brisbane and Auckland.)

Choose morning, afternoon, evening or night time for this three and a half hour climb. Each gives different atmospheric views across the city. The process is slow, kicking off with a safety briefing and donning the protective clothing and harnesses.

As you climb you will have an in-ear commentary, talking about the landmarks and their history. Your guides will be young, fanatical climbers, willing to socialize and have a laugh.

From above ground to below ground. This tour, however, is only open twice a year. As you head underground into the old Tank Stream Tunnel look out for mason’s marks made by the convict laborers who dug the channels, designed to bring fresh water into the early Sydney colony.

Again a safety briefing will be followed by protective clothing and a harness to help you climb down the 3 meters-deep shaft. Sydney was chosen as a settlement because of its fine spring waters flowing into Sydney Cove.

The Tank Stream led from storage tanks in the surrounding sandstone used to supplement the colony’s growing demand for water. By the early 19th century the fresh water tunnel had become a sewer and was disused and hidden from view in the 1950’s, eventually disappearing under the growing city. Now it is only opened up twice a year for intrepid tourists. Expect to spend part of your time underground doubled up.

Now for something totally different. Take a drive around Sydney in a Batmobile. Zac Mihajlovic took two years to build his working reconstruction of the Batmobile, and a little less time to make his costumes.

This 6.2 meters long replica from the 1989 Batman film is fully registered and insured. Zac is a super-hero fan and enjoys hiring out his Batmobile or using it for charity events. What better way to get from A to B.

Sydney is world-famous for its drag queens. The Imperial Hotel is where The Adventures of Priscilla, Queen of the Desert started and is the spiritual home of drag in Sydney. Here you can dine and enjoy a lively cabaret with talented drag queens.

If you want more, head for the golden gay mile of Oxford Street where Stonewall and the Midnight Shift give glitzy extravaganzas. If you want a go yourself, then enter Drag for Dollars, held every Thursday night.

Ready to relax a little. Enjoy glamorous cocktails at the Ivy. A Palm Springs type resort, modelled on the 1960’s, can be found at the top of the Ivy complex in the heart of the city. This is the place to sit back, cocktail in hand and celebrity watch.

Models and millionaires can be found enjoying the pool bar on the rooftop. Or better still, take to the water and lie back on a lilo.

Combine Cantonese cuisine with board games in the MahJong Room. Head to Surrey Hills to find this modern Chinese restaurant. As you enjoy traditional and delicious dim sum, learn to play Mahjong.

This experience is called Mahjong PlayLunch and as each game requires 4 players per table, your party must be of 4, 8 or 12 people.

Finally the Salt Rooms. This Salt Therapy Clinic is a stone’s throw from Bondi Beach. Salt mines and caves have long been recognized as having health giving properties, but many are only accessible to multi-millionaires.

This clinic recreates natural salt caves right in Sydney. You enter individual pods (or group pods, if you’re sharing the experience) which have Himalayan salt lamps, a small table and a reading lamp. Snuggle up in the super soft blanket and relax.

The floor is covered in a layer of salt, which purifies the atmosphere. For 45 minutes you just chill by reading, writing, listening to music or falling asleep. What better way to finish your ten unique things to do in Sydney.